Most FOURS and SIXES in IPL

Most Wins in IPL

Here is the list of wins by all teams season by season.

Email ThisBlogThis!Share to TwitterShare to FacebookShare to Pinterest
Labels: Csk wins in ipl, IPL Champions, Most matches won in ipl, Most wins in IPL

A hat trick is an achievement in cricket, by bowlers, when they take 3 wickets off their 3 consecutive legal balls in a match.
Note : A hat trick can extend to 2 overs and even to 2 innings in Test Matches.

As of on 17th April 2013, there have been 11 hat tricks in the Indian Premier League. The first bowler to take Hat Trick in IPL was Lakshmipathy Balaji for the Super kings vs the Kings XI Punjab at Chennai on 10th May in the first edition of IPL
01. Lakshmipathy BALAJI, CSK vs KXIP, Chennai,2008 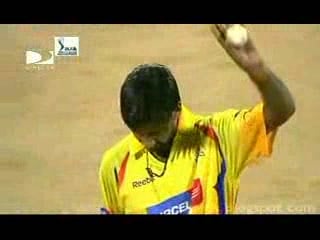 Balaji dismissed Irfan Pathan (Caught), Piyush Chawla (Caught) and VRV Singh (Caught) on the 3rd, 4th and 55th delivery of the final over of the match and CSK won the match by 18 Run s. Balaji finished with 5/24 and was awarded the Man of the Match.

More Stats
Posted by Unknown at 03:50 No comments:


There have been only 4 matches tied in all the editions of IPL so far.
Here is the list of all the Super Overs played in IPL so far:
SUPER OVER No.1, KKR vs RR, Cape Town, 23rd April 2009

Yusuf Pathan was the hero for Rajasthan Royals
This happened to be the first tied game in IPL – the 10th match of the second season played in South Africa. The match was tied, with both teams scoring 150 runs. Kolkata needed 2 runs off the last ball but could score only one; the match was tied and super over was played to decide the winner.
Super Over

Email ThisBlogThis!Share to TwitterShare to FacebookShare to Pinterest
Labels: First Tied match in IPL, Super over in ipl., Tied matches in IPL


Here are all the achievements, records, facts and stats of the First Week of IPL (3rd April to 6th April, 2013) , match by match.
MATCH NO.1, KKR vs DD, Kolkata, 3rd April 2013
* Unmukt Chand became the 15th Batsmen to be dismissed FIRST BALL of the INNINGS in IPL  and 2nd batsman after Manoj Tiwari in 2010 to be dismissed off FIRST BALL of a SEASON in IPL
* Mahela Jayawardene scored his 9th IPL 50 and also completed his 1500 IPL Runs. He became the 16th Batsman to complete 1500 Runs in IPL.
* Manprit Juneja scored his First IPL Run in career, making his debut.
* Sunil Narine became the Highest Wicket Taker for KKR in IPL, overcoming Ishant Sharma’s tally of 25 wickets. He now has 28 wickets for KKR
* Figures of 4/13 by Narine are the 3rd Best Figures against DD in IPL after Malinga’s 5/13 and Shoaib Akhtar’s 4/11.
* Sunil Narine joined Anil Kumble, Lakshmipathi Balaji, Lasith Malinga and Munaf Patel to take 3 4 wicket hauls in IPL Career.
* Sunil Narine features in 3 of the Top 5 Bowling Figures for KKR in IPL
* DD’s total of 128 is their 5th Lowest Total in First Innings in IPL. Lowest being 95 vs MI in 2011.
* Yousuf Pathan completed his 1500 IPL Career Runs. He is the 17th achieve that.
* KKR completed their 6th Win against DD in 10 matches they played.
* Sunil Narine received his 5th Man of the Match award in IPL.

More Stats
Posted by Unknown at 08:06 No comments:

I have listed the best Opening Pairs and Partnerships in Indian Premier League History.

Most Aggregate Runs by Opening Partners

More Stats
Posted by Unknown at 03:49 No comments: