T20 clashes between India and Pakistan: A Statistical view

The first clash between India and Pakistan in the modern format of cricket – T20 – was in the ICC World T20 2007 at Durban, South Africa. And the match got to end with none of the teams winning! Yes, the match was tied. Bowl-Out, the decider of tied matches, was played and India won on the same basis. With this, India continued their streak of never losing to Pakistan in World Cups (both ODIs and T20Is). India also defeated Pakistan by a mere 5 runs in the final of the same tournament to lift the inaugural T2o World Cup. 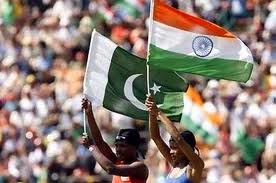 Both teams once again met in the ICC World T20, this time 5 years later, in Sri Lanka in 2012. India held the upper hand once again and the result was the same which began in the 1992 World Cup. 3 months later they played a T20 bilateral series of 2 matches in India which ended in a draw 1-1.
Now, India in the way to continue their winning streak against the neighbouring oppositions and the oppositions searching for a way to end the streak, they meet in the first match of Super-10 stage of the ICC World T20 in Bangladesh.
Overall, Pakistan has a better record against India in both the other formats – Test & ODI.
Pakistan vs India: Head to Head in all formats

Results of the T20I matches between the teams:

Man of the Match awardees:
*-Captain
Captains:
MS Dhoni has been India’s captain in all the 5 meetings between the two sides. Whereas for Pakistan, 2 matches were skippered by Shoaib Malik in the 2007 World Cup and the rest of the 3 matches in 2012 were skippered by Mohammad Hafeez.
MS Dhoni and Mohammad Hafeez will be facing each other in the super-10 match in this world cup.
Half-Centuries by batsmen:

There have been only 2 4-wicket hauls between the two teams in T20Is and 7 other 3-wicket hauls.

Economy Rates in an inning:

There have been only one 100+ partnership in the 5 T20I matches between the two sides. It is the 106 runs stand between Hafeez and Malik for the 4th at Bangalore to successfully chase target of 133.

Suresh Raina, Umar Gul, Shoaib Malik and Rohit Sharma have taken 3 catches each which is the most.

In all the 5 matches between the two sides, the wicketkeepers have remained the same – MS Dhoni & Kamran Akmal. The former dismissed 7 batsmen (including a stumping) while the latter got 3 Indian batsmen dismissed, all caught.

Some Records and Milestones to aim for the players in the match:

# Indian skipper, MS Dhoni, will be looking to get a half-century as he hasn’t got one in the 43 T20I matches he has played so far. His highest score is 48* vs Australia at Sydney in Feb 2012.

# Virat Kohli needs 58 more runs to complete 8000 runs in International matches for India. Only 12 Indians have got to the feat so far.
# Shahid Afridi needs one wicket to reach 500 wickets in International cricket. Imran Khan, Wasim Akram and Waqar Younis are the only Pakistan players to reach this landmark in their career.

# If, India loses this match; MS Dhoni will become the Indian captain with most number of defeats in International Cricket. Currently he is tied on 90 defeats with Mohammad Hafeez.

Pakistan have reached into Semi-Finals in each of the 4 previous editions of ICC World T20 and will be looking to begin their campaign with a win and ofcourse they will be in concern to somehow break the streak of losing to India in World Cups.

India haven’t reached the Semi-Finals since their inaugural world cup in 2007 and with West Indies and Australia being the other 2 in-form teams in the group, they will be thinking to start off the World Cup with a positive result.

And, by the way, both the teams won one and lost one of their 2 warm-up matches so far.

India are the only team to play less than 50 T20Is among the top 8 teams while with 78 matches, Pakistan has played the most number of matches in T20Is.

So, another classical India vs Pakistan match on the way..

Posted by Unknown at 23:23 No comments: Links to this post

Players bagging a Duck on Birthday in Tests, ODIs and T20Is

Tamim Iqbal on 20th March 2014 became the first batsman to be dismissed for a duck on his birthday in T20 Internationals.

But there are several players who bagged a duck on their birthday in Tests and ODIs.

Players bagging a Duck on Birthday in Test Cricket

Thanks to Aslam Siddiqui for the missed instances.

Players bagging a Duck on Birthday in ODI Cricket