The Jamaican hard hitting batsman, Christopher Henry Gayle holds the record for the fastest century in IPL and also the fastest in T20 matches. He hit 175* off 66 balls against the Pune Warriors India on 23rd April 2013. This extra ordinary inning consisted of 17 huge sixes and 13 fours. Having completed his half century in 17 balls, he continued the damage and completed the century in a mere 30 balls. 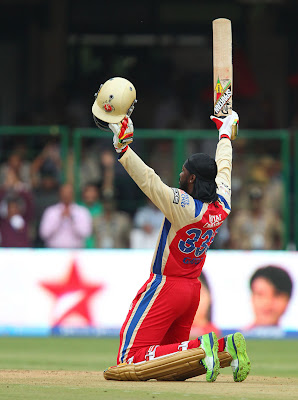 The previous fastest century in any form of t20 games was by Andrew Symonds, who hit a century for Kent off 34 balls in 2004. Gayle is the leading century scorer in IPL and T20 matches. He has hit 11 centuries in T20 matches and 4 of them in IPL. Also holds the record for the maximum number of sixes in a t20 innings, overcoming Graham Napier's 16 sixes in his 152*(58) for Essex vs Sussex in 2008.

Yousuf Pathan smashed the fastest hundred in the history of Indian Premier League on 13th March 2010, playing for Rajasthan Royals vs the Mumbai Indians. This is considered one of
the best T20 innings. His 37 ball hundred is jointly the 4th fastest hundred in T20 matches, after Chris Gayle (30)Andrew Symonds (34), Louis van der Westhuizen (35) and Scott Styris (37). 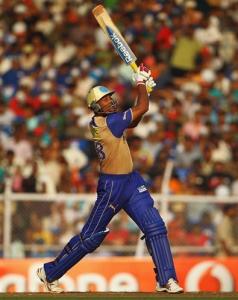 Rajasthan Royals were set a target of 213 runs by Mumbai, and soon they were 40 for 3 in the 7th over. And Yousuf Pathan arrived at the crease then and played this awesome innings consisting of 9 fours and 8 huge sixes and scored the 100 in 37 balls. His first 50 came in 21 balls with 2 fours and 6 sixes and when he was unluckily run out, the scorecard read  173/5 in 17.1 overs. And still 40 needed from 17 balls, Royals lost the match by a mere 4 runs, and Pathan’s brilliant innings went in vain

Playing one of the best ever T20 knock in the shortest format of the game, David Miller made it look so easy at the end. Against an all international bowling line up of RCB, Punjab were crumbling at 64-4 after 9.5 overs on 6th May, 2013. Loss was almost certain as they were chasing a mammoth 191. But David Miller had something else in his mind. He scripted one of the best ever chase in the T20 cricket and achieved it successfully. The heroics of Miller can be imagined by this single fact that Punjab needed 94 runs to win from 40 balls and at the end they won the match with 12 balls to spare. Miller scored 74 runs from the last 20 balls he faced. RCB bowling attack was shattered and Miller completed a chase that will go down in the history of IPL as one of the best ever chase. R P Singh was thrashed for 26 runs in the 15th over of the inning and the carnage began from there. It is at 3rd spot in the list of fastest centuries in IPL and proudly sits at 6th spot in the list of fastest century in T20 cricket. 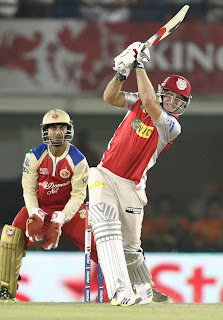 One of the better hitting you would ever see, chasing a target of 155, smashing the ball all over the park from the first over for Deccan Chargers against the Mumbai Indians on 27th April 2008. Gilchrist, as he is well known for his hard hitting at the top, did the same way. Completing 50 off 28 balls with his favorite shot, the Pull Shot, a whooping six, and the bowler was none other than the Great Shaun Pollock. When he hit his 50, the stats were 53 in 28 balls with 7 fours and 3 sixes in the 3rd ball of 7th over. 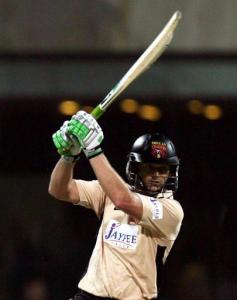 He was more demolishing after that, completed his maiden IPL century and then the fastest IPL hundred in 42 balls with 9 fours and 9 sixes. Hence last 50 runs in 14 balls with 2 fours and 7 sixes. His 3 sixes were off Pollock in single over, Amazing ! Was equally supported by VVS Laxman (37* off 26) and both had an unbeaten partnership of 155 runs and winning the match with all 10 wickets in just 12 overs.  Gilly finished with 109* off 47 balls, hitting another six.
05. 45 balls by SANATH JAYASURIYA
One of the best attacking openers of all time, Sanath Jayasuriya, even at the age of 39, showed no mercy to the young bowlers in IPL, when he scored a century of just 45 balls, playing for Mumbai Indians against the Super Kings. Surprising thing was, he never had any impact on any of the previous 7 matches he played in the edition and this 8th match was the first for Sachin Tendulkar in IPL and then the Lion roared. Mumbai were chasing a target of 157 runs at their home ground and I guess, it was the impact of the Master Blaster that made Jayasuriya play his natural game for the first time in IPL. 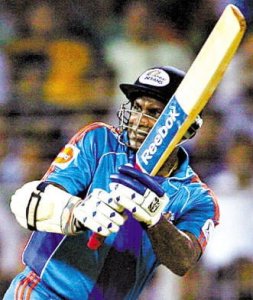 Achieved his maiden IPL fifty in 25 balls with 2 fours and 5 sixes, and continued his destruction and when he was at 88* from 43 balls and 25 more runs to win, he smashed his team mate Chamara Kapugedara for 6,6,6,4,4 off the first 5 balls of the 14th over, and what else was remaining, the match was won by Mumbai Indians by 8 wickets, with Jayasuriya scoring 100 off 45 balls and finishing with 114* off 48 balls including 9 fours and 11 sixes. Mumbai won the match by 9 wickets with 37 balls remaining What an impact this innings had to him in IPL ! No fifty in first 7 matches and at the end of the IPL he was the 3rd highest scorer with 514 runs.
Posted by Unknown at 07:53

Email ThisBlogThis!Share to TwitterShare to FacebookShare to Pinterest
Labels: 100s in IPL, fastest 100 in IPL